In this short article, the author will explain some of the important ways to measure the success of a tweet, and also a couple of tools to improve audience exposure . Using this information to benchmark the success of a sign shop’s efforts will greatly increase the effectiveness of this free publicity platform.

After posting on Twitter, also called a “tweet,” check back in on your post about 24 hours later.  When looking at your page, you will see three vertical bars under the post. Clicking on these bars opens up the statistics. 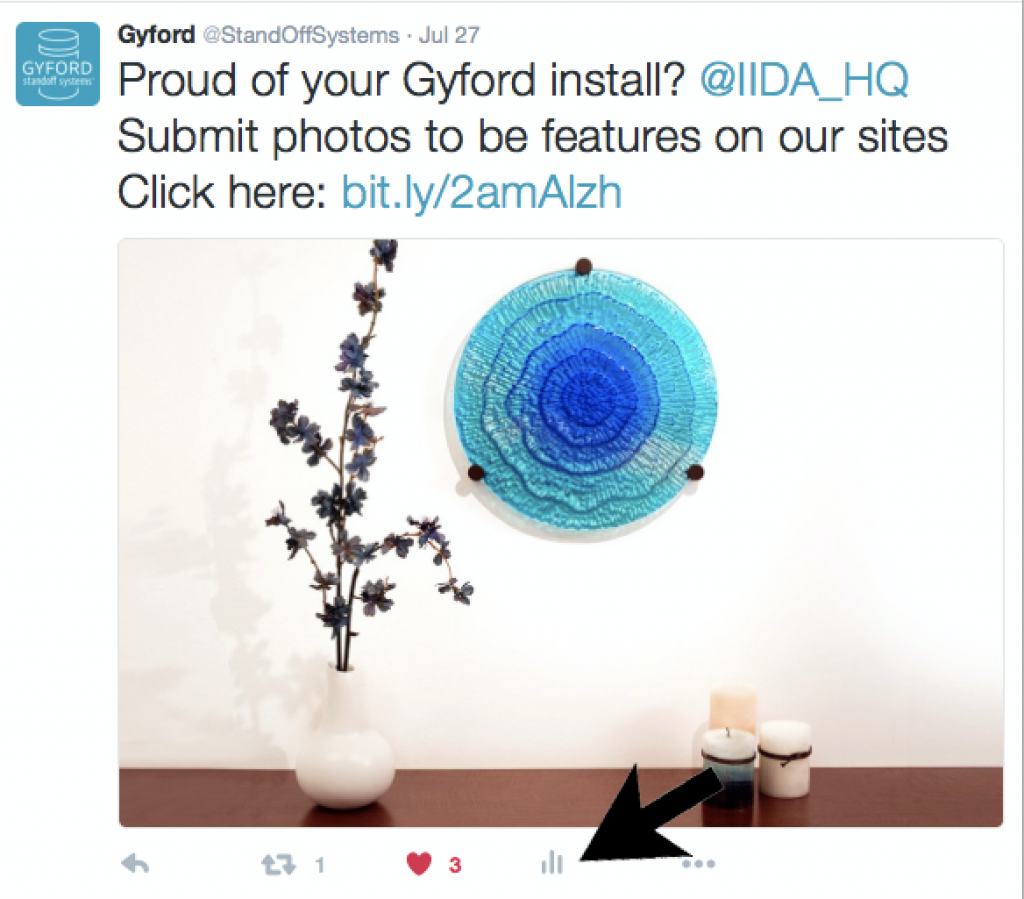 Within your posts’ statistics, the top two stats displayed are Impressions and Engagements. The basics of motoring your Twitter success is weather these two statistics are increasing.

Impressions are the number of times your post has shown up on a users screen.  This doesn’t mean they read it or even clicked on it, the opportunity simply was there. This is the exposure your tweet received.

The Engagement is the total of all the activities that users participated in as they interacted with your tweet. This includes all activities listed below, such as expanding the image to get a better look, liking the post, retweeting (sharing with their followers), and so on.

Below, the author will describe two easy methods to increase engagement for your posts.

The post above featured a properly sized image to draw attention and a (#)hashtag that targets a specific subject area, #interiordesign. Other’s who want to contribute to this subject will also use this hashtag. Searching for tweets/posts with #interiordesign will display all contributed content that is tagged.

In this case, we’ve mentioned related organizations such as a museum, some magazines and a retail store.  Impressions were high because this tweet was liked by the other organizations and in one case reposted to their own audience. This is terrific cross promotion and also a great networking tool.

Without a hashtag, the post was limited to only @standoffsystems followers and the other organizations that were mentioned. This resulted in high impressions but low engagement. The engagement for this tweet could have been much greater if a hashtag was used to reach a wider audience. For a complete list of definitions  visit the Help Center on Twitter https://support.twitter.com/articles/20171990